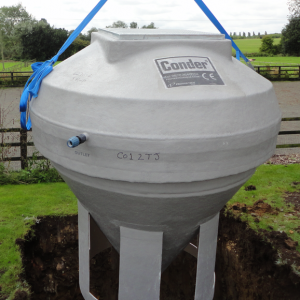 When we discovered that our newly acquired Grade 2 listed cottage had a cess pit instead of a septic tank, as we had originally thought, I started to research for solutions on the internet. The old pit seemed to allow groundwater to seep in, but there was no flow the other way, meaning frequent emptying even though we were very careful. Along with a low point on the property which flooded in heavy rain, we needed to find permanent solutions to the problems. The responses to my enquiries to various companies fell into three categories;

When I found Infinity Environmental, Mr Billy Barry arranged a visit and afterwards came up with potential solutions to both problems. He offered to liaise with and apply for the necessary permit from the Environmental Agency to discharge treated effluent into a borehole, having to modify the proposal after initial contact with them, and has now installed a water treatment plant and groundwater/roof water drainage system which has been inspected and passed by the Suffolk Building inspection team. The work has been well planned, carried out efficiently to the agreed schedule and with due regard to the nature and character of our cottage: the cost exactly as per quote. Having been present at the beginning of each of the two stages of the project, we have been amazed on our return at the way that the garden has been largely restored to its original state (a patch of bare earth remains which Billy has seeded).  The systems are now up and running, we are self-sufficient and environmentally friendly! We have no hesitation at all in recommending Infinity Environmental and are very grateful that Billy had the willingness and initiative to take the job on.

Get A FREE Site Survey
This site uses cookies: Find out more.